9. After breakfast we loaded the back up car and got our bikes ready for the days trip.Today we were visiting the Keren Area where women wear brass rings round their necks. As we reached the main road we entered the first petrol station to top up our bikes. Bob discoveredthat there was a leak from my bike’s radiator. He had a novel way of fixing it. Bought a couple of raw eggs broke them and poured the white of the eggs into the radiator. The white of theegg would with heat solidify and seal the leakage. He tested the leak after running the engine for about five minutes, but was not satisfied, the bike was found unfit for the trip. I was without a bike now. Manoj and Bob decided that Bob would stay back to have the bike repaired, while I would upgrade to Manoj’s Kawasaki 650 cc and Manoj would drive Bob’s 750 cc bike. This was indeed a blessing for me, as for the remaining five days I had this wonderfulbike to drive and tried to quickly adapt to it. Its pedals, the gear lever and the brake pedal, were located further to the rear and I had to feel around with my feet before locating them. Ourdrive was again on mountain roads with generally light traffic. I was still way slower than the others. I wasn’t being able toadequately bank the bike at turns and had to slow down, there were times when the bike at a turn would not slow down sufficiently, or so it seemed to mebecause of the ABS, I chose to be safe rather than sorry, and took all turns very slowly. Gradually I gained more confidence and could negotiate a turn at maybe around 50 kmph onthe gentler curves. 10. Today we negotiated the Mae Hong Son, loops with 1864 hairpin bends one way, a total of 3728 hairpin bends in all, quite a bit. Tea-shirts, popular with bikers, indicating the number of hairpin bends, are available at Keren. Having crossed Mae Hong Son city, we headed towards the “Long Necks” village at Keren. There were half a dozen causeways with water that we had to cross. Manoj cautioned us, that while crossing the causeways with the heavy bikes, we must reduce speed to near zero, drive absolutely straight, and not to either brake or speed up, as the bike tyres were not designed for off road driving. In one of the causeways, I did all three things wrong, and in my flurry could not locate the brakes or gear pedal with my feet, as instinctively my feet went for the Royal Enfield alignment. On the Kawasaki, besides being on opposite sides they are located way behind. Fortunately I just managed to control the bike and crossed the causeway without getting wet. We arrived at the “Long Necks”, village and visited the small shopping area where their handicrafts were on sale. We had ourselves photographed with the women wearing the neck rings. These rings distort the growth of the wearer’s collarbones and makes them look as if they have long necks, which they don't. They actually squash the vertebrae and collar bones. A woman generally has about twenty or more rings around her neck. This neck ring adornment is started when the girls are 5 or 6 years old. The rings on the arms and the legs are not quite as prominent as those on the neck simply because the neck rings are so visible. However, these rings are just as important. The rings on the arms are worn on the forearm from the wrist to the elbow. Those on the legs are worn from the ankles to the knees, and cloth coverings are kept over most of these rings, from the shins down to the ankles. BACK AT COFFEE POINT 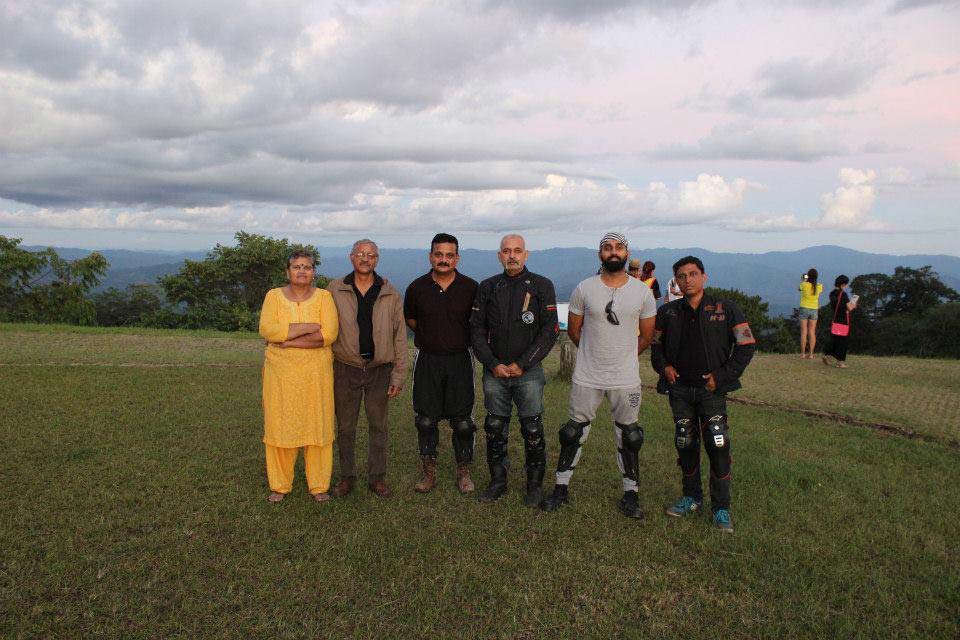 11. Again while returning from Keren, we took a break at the Coffee Point. I was as usualthe last to reach, desperately trying to catch up to the others. It being a Saturday, this time the Coffee Pont was full of visitors, mainly youngsters. Little girls came up to us, asking if we wouldlike to be photographed with them in return for a little payment. Before we left around 6 p.m. a number of multi coloured camping tents had been pitched. Good to see people enjoying themselves. It took us an hour or so to reach our next stop at Pai. Pai is a bustling holiday resort of sorts, teaming with tourists, many restaurants, andsome of them with live music. We visited one where three men were belting out the blues, verygood they were. Two were Thai young men and one an angrez. 13. Our days destination was Chiang Dao, a visit to the Sulpher Hot Springs and night stay ata Farmhouse. Our drive would be on an open and fairly straight road. The Team, drove with avengeance. They drove their Bikes to touch 160 kmph and cruised at 140 kmph, taking the bends and turns in their stride. It was our chance to break out. I dared to drive at 100 kmph fora short spell but it was out of my comfort zone, and pulled back to around 80 kmph. We stopped at a picturesque road side restaurant for lunch. A smart young lady came to take ourorder, we learnt from Bob that she was a ladyboy.

14. A glass of beer, followed by sumptuous lunch, with background music of the 50s, I thinkit was Ella Fitzgerald singing. Wanted to stay on longer at this location and catch up on a bit of a snooze. We had, however to press on as there was lots more to be seen and done. The Farmhouse was not too far, when we got there, we parked our bikes, unloaded our baggage, collected our swimming gear and headed for the Hot Springs about 20 kms away. The SulphurSprings though hot, were refreshing. While returning I realized I was not wearing my specs, thought I must have left them behind at the Farm House. Despite a thorough search at theFarm House, I couldn’t find them, probably they dropped out of my pocket while changing at the Hot Spring location. I located my spare pair of specs. Two down already, one, I had left mymobile back at Kolkata and now lost my specs.

15. Manoj and Bob had arranged a Camp Fire, where we exchanged views, and discussedvarious issues connected to mo’biking, and also had a music session. It was a very enjoyable evening, particularly for me, as I again got an opportunityto “Blow myown Trumpet”. PARAG AT THE FARM LOCATION PRITHVI AND BHANU APPRECIATING THE PAINTING DONE BY AN ELEPHANT THE MIGHTY MEKONG RIVER WITH LAOS ON THEOPPOSITE BANK

16. Today we would drive across Chiang Rai city, and head for the Golden Triangle. The Golden Triangle is where Thailand, Burma and Laos meet. The day started with a drive to witness an “Elephant Display”. There was quite a crowd of visitors there. The elephanats paraded past, showed us different techniques of hauling logs. Finally a young elephant painted a pretty scenery on a drawing board. I dare say his art and painting was far better than what I have ever been able to achieve. After the show, the Victorianz, hit the road and sped away, cruising at well over 100 kmph, including me. By now I too had gained considerable confidence to cruise at around 110 kmph, one of the main reasons for the increased confidence was that I had learnt to apply the front brakes of the bike. Using both brakes together to bring the bike to a stop was very effective, I have almost never used the front brakes on my own bike, and was therefore hesitant to use them at high speeds.

17. After a quick lunch we resumed our trip, and zipped along. I was on my own well behind the others, even though in spurts I drove at 130 kmph. Suddenly I heard a loud flapping and hammering sound. My first bike had a radiator problem, I was hoping nothing had now gone wrong with the Kawasaki. This hammering sound was from my helmet, I braked hard and found that the plastic visor of the helmet had sheared off from one side and was flapping against the helmet. I had been driving with the visor open, and because of the high speed it had sheared off from its attachment on the right side, should have kept the visor pulled down. I removed the visor and tucked it inside my jacket so it wouldn’t slip and fall off, then continued on my way. While waiting at a traffic light, Bob screeched to a halt beside me, I was surprised as they were supposed to be ahead of me. I believe in my complete focus and concentration on the road at that high speed I missed the others yelling and waving at me, to stop, as we were to take a turn off the main road. Luckily I had slowed beacause of the helmet problem or else it would have taken longer for Bob to catch up with me. Bob smiled and told me that another Km ahead was the Burma border and in any case I would have been stopped. We made a U-turn and got back to the Group, about a couple of kms away. We thundering on, I enjoyed zooming ahead of the traffic when we stopped at traffic lights. No sooner would the light turn green we would rev up and shoot ahead, the engine screaming at a high pitched whine. I was not behaving my age at all, but it was good fun. The road was straight smooth and wide, the bikes were capable of comfortably zipping ahead at 200 kmph. With everything tailor made for speed, we continued to race on, it was thrilling. I touched 140 kmph, had to watch the road and not the speedometer.

18. `By around 5 p.m. we reached the Golden Triangle, and parked on the banks of theMekong River. The area was choked with tourists, buses, taxis, private cars and two wheelers. Prithvi very aptly remarked that he was reminded of one of our Haryana Bus Stands. 19. We were issued temporary passes to go across to Laos, our Passports were taken by theSecurity and a receipt given. We got into a motor boat, first went downstream towards Burma, saw an impressive Casino close to the Bank. Then we turned back, crossed the Mekong Riverand entered Laos. There was a large shopping complex, with a variety of attractive items for sale and quite cheap too. Bob introduced us to various specialties of the place. We made a fewpurchases Bhanu was the expert who could bargain and got us items at a respectable reduction from the price demanded. Our shopping done and their whiskey, stored in large glass bottlesalong with a variety of reptiles tasted by the more daring ones, we got back to Thailand, across the Mekong River. Collected our Passports, and drove to our Hotel. Sitting at the Hotel lounge,we enjoyed watching the River and the boats chugging by, it was a soothing and peaceful experience. After an early dinner we retired for the day. THE OPIUM MUSEUM AT THE GOLDEN TRIANGLE